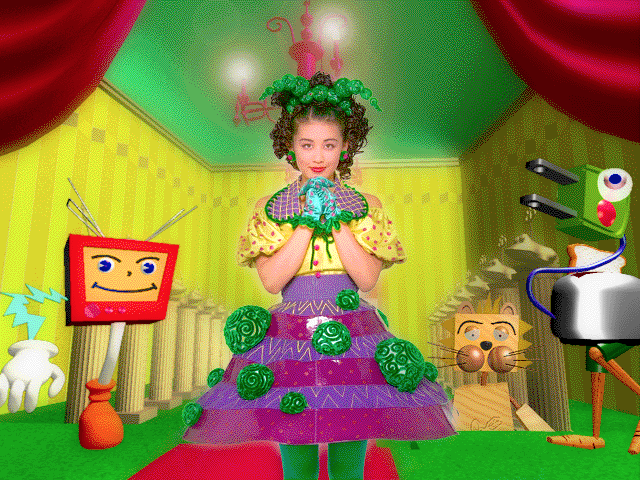 Record labels were some of the first companies to jump onto the early 90s CD-ROM games trend[1]. In Japan especially, music studios had been quick to expand into other media, like film and video games—not as new ways to release their music, but new ways their production and marketing networks could extend to new mediums. But as long as you've established a new market, why not use that to promote the music you also sell? And when you're looking for an artist, why not choose someone who's done it before?

Singer Eriko Tamura, meanwhile, was an early adopter of cross-media promotion. For a lot of girls, their first encounter with her wouldn't have been on the radio or via one of her records, but on TV. The hit show Idol Densetsu Eriko[2] features a fictionalized version of Tamura as its main character, and includes many of her songs at key moments, so it's no surprise Tamura's career took off right away. It premiered a few months before Tamura's debut album, 1989's May Be Dream, which was a huge hit—especially with the show's viewers.

It's no surprise that she was happy to jump on multimedia games as a new promotion medium. She was signed to Eastworld at the time, a label operated by Toshiba EMI, and by 1994 they were well-established as one of the prominent publishers in the new medium. Eriko Tamura: Oz was published by Toshiba EMI for Mac in 1994, still early in the multimedia game wave, and features Tamura's digitized likeness as the main character. It was developed by game and CGI production studio Future Pirates with character designs by Ultra's Hitomi Amakawa. 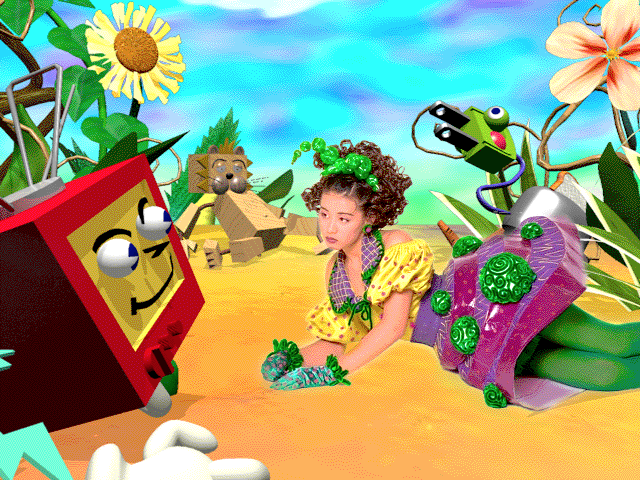 The plot follows Dorothy as she wakes up in Oz with no memory of who she is. Luckily, there are three new friends nearby who offer to help: a cowardly lion, a talking television, and a living toaster. The four of them set off together to try to find a way for Dorothy to return home, following a tip from Toto the dog.

This obviously isn't a traditional Oz story; it's more of a loose adaptation or pastiche. Their journey takes them through a variety of different areas along the Yellow Brick Road, with each chapter following a set format: the four walk to a new location, they meet a character or obstacle of some kind, and players must choose one of the four characters to try to resolve the conflict. With its repetition and regimented structure, it's clear this is for very young children. An adult reader might grow bored of the storytelling by the second or third chapter, but the repetitiveness is perfect for the attention span of a small child. It's also well-tuned for a parent to enjoy together with their child, with the repetitive structure and simple set of choices leaving room for a parent to improvise additions to the story of their own or to help guide their child into making the right choices. The gameplay, too, is simple enough for young children: just click the screen to advance after hearing some spoken dialogue, and occasionally make a choice by clicking one of the four main characters to ask for their help. There are no consequences for losing, and players can try again until they find the right option. 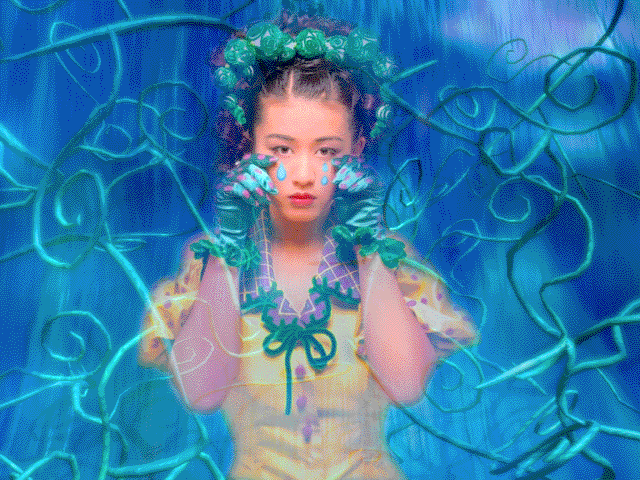 By 1994 there were a lot of CD-ROM games blending live action video and CGI, but what makes Oz stand out is just how good it looks. The "live-action CD-ROM game" look is usually characterized by inconsistent lighting and slapdash compositing, so Oz is a genuine surprise by how seamlessly it accomplishes everything. Tamura is carefully lit to match her CG environments, with well-applied use of bloom and other effects to help ensure a uniform look. It's genuinely quite beautiful and doesn't look like much of anything else in gaming.

At the time Oz was released full-motion video was steadily taking over from the partial-motion multimedia CD-ROMs that had been common for a few years, so Oz does stand out by its heavy use of stills and limited animation. Given its focus on the quality of its photography, however, it's a canny choice: full-motion video wasn't ready for full-screen, high-resolution video yet without sacrificing visual fidelity, and Oz's visuals would lose their distinctiveness if detail was compromised. 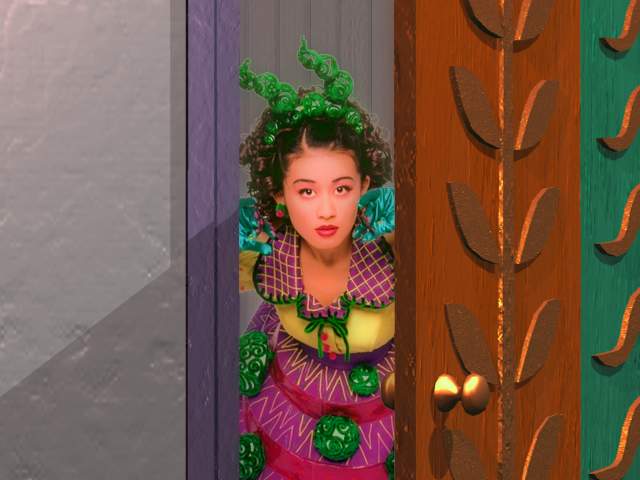 The main game is presented in 256 colours, which was still the standard for CD-ROM in 1994; few players owned devices that could display high-resolution images in "millions of colours" modes. For those lucky few who did, Digital Pirates bundled a gallery application on the game disc. This application features a slideshow with photos from the game in 16-bit or 24-bit colour set to the theme song.

Being at its heart a marketing device, it's not surprising that Oz features one of Tamura's songs. Kara Kara Tenki, off her 1993 album Sure[3], is a gentle upbeat pop song with a catchy chorus. It's a pleasant but relatively slight track, but when played over the surprisingly melancholy final scenes it takes on an extra emotional depth. 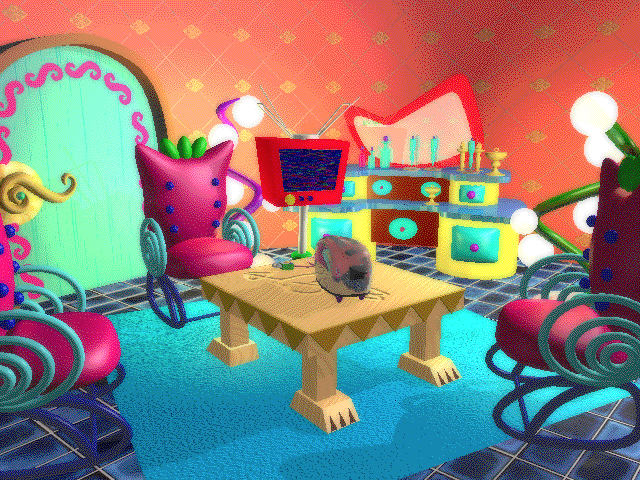 Outside Tamura herself, the well-crafted character designs and environments stand out. Blending retro-futurism with brightly coloured surreal environments, it manages to avoid being derivative of the many other takes on Oz out there. That it looks this distinctive isn't a surprise to fans of Amakawa's other work; it's not hard to squint and see an early draft of her designs in Jumping Flash (1995) or Astronoka (1998), both of which feature a similar sort of sleek retrofuturism and carefully-selected clean shapes that look good in primitive 90s CGI.

This was among the first games released by Future Pirates, who went on to self-publish quite a few CD-ROM games based on licensed properties over the next few years; one or two of them might feature on this blog. The company was led by media producer Tsuyoshi Takashiro, who had previously directed music videos and made appearances on late-night TV[4], and he seems to have seen himself as the company's main figure. All of their early games feature him in a prominent "produced and directed by" role, and he acted as the company's public face in media coverage. Over time Future Pirates transitioned to contract CGI production for games and film, a field they were active in as of just a few years ago.

As for Tamura, Sure would turn out to be her final album. She wouldn't stay out of the spotlight, however: she refocused herself on acting, and would appear regularly on Japanese TV. She later moved across the Pacific and took on recognizable roles on US TV in the second season of Heroes (2007) and in the live-action film Dragon Ball: Evolution (2009)[5].

1. Record labels had been involved in traditional gaming since the 80s. Their involvement in computer CD-ROM gaming dates at least to the 1991 release of Synergy's Alice: I Can't Explain Myself by Toshiba EMI. ↩